Framing contests in SD: the growth of growth scepticism

Media coverage and public interest in SD is typically dominated by the more specific, narrower issue of climate change, which itself has become a fiercely contested arena where an array of individuals and institutions have sought to frame the issue as one of controversy and conspiracy rather than objective science. This framing contest is a complex and fascinating arena for academics, both as direct participants and as interested observers. And it's also completely infuriating of course - sometimes I just want to get mad before I think about getting even.

But if, as Zizek himself cautions in his latest book, getting mad is a waste of emotion, how do we as academics apply ourselves to getting even? I'm currently researching how we can use concepts of frame analysis and social movement theory to analyse framing contests, with a view to hopefully understanding more about how academic engagement and accounting interventions might produce more effective or even emancipatory outcomes.

It's worth noting that those making the case against climate change haven't had it all their own way of course, and have themselves been subject to counter-framing, typically by being labelled climate change sceptics, or perhaps more accurately, deniers. The Guardian's George Monbiot has gone toe-to-toe with many of the sceptics, and shed light on their frequently underhand tactics.

Recently, however, the tables have been turned once again, as debate about SD shifts away from climate change and more towards the broader issue of economic growth in a sustainable world. The same sceptic label applied to the climate change deniers is now being applied to the SD community, who are being framed as growth sceptics. This also allows the political right to tar many more opponents with the same brush, such as the distinguished academics researching the area of health inequality. It's clear that, while the SD community has perhaps been slow to connect the health inequality and climate change agendas, the political right is now keen to do this job for them...
Posted by Colin Dey at 12:23 1 comment:

Integrated Reporting: Where Have All The Academics Gone?

The newly established International Integrated Reporting Committee (IIRC) announced its formation last week. Having been involved with one of the IIRC's main sponsors, the Prince's Accounting for Sustainability charity, I certainly welcome the formation of IIRC and would wish to endorse its aims. Elsewhere in the blogosphere there have been some reservations expressed about the ability of the IIRC to deliver on its stated aims, which is understandable and also welcome, since it is essential that the work of the IIRC is visible and subject to proper scrutiny and critique.

My own reservation about the IIRC is the apparent lack of academic representation on the main working group. Despite recognising the role of academics as valuable stakeholders in the development of integrated reporting, and despite the work of the academic teams involved in the recent A4S book published last month, the IIRC have not yet appointed any academics to the working group. I sincerely hope that the IIRC reconsiders this situation and seeks to appoint at least one academic to the working group.
Posted by Colin Dey at 12:34 No comments:

According to a recent article in the THES, the recipe for great teaching depends upon what is rather dubiously referred to as 'edutainment': teaching that combines education and entertainment. Student demand for this may be more to do with falling attention spans than any of them instinctively grasping towards something truly dialogic, but hey, let's not get too picky - the point is, academics in the area of SD arguably have a role as 'public intellectuals', and as such have a responsibility to empower students and to transfer knowledge from the academy into the 'real world'. A crucial element of this is communication, and one way we can enhance our communication is to draw on visual imagery.


A few outstanding examples of visual approaches to academic communication of ideas central to SD have appeared recently. The RSA's 'RSAnimate' project has created short animated films based around the actual recordings of some of their guest speakers. It's a simple but brilliantly clever and effective idea - a little reminiscent of the BBC's realisation of the Hitchhiker's Guide to the Galaxy. The RSA short films will be an excellent  resource to use in lectures and seminars, but beyond that it would be great to see more of these in the areas of SD and accounting.

Thinking about how effective the RSAnimate films are, it's surprising that this approach isn't used more often. I can only think of a few similar examples, ranging from Baddiel and Skinner's Unplanned comedy show, to Hans Rosling's remarkable TED presentations which also led on to the creation of the equally remarkable Gapminder website.

Know any other useful resources? Comments please!
Posted by Colin Dey at 12:17 1 comment:

Email ThisBlogThis!Share to TwitterShare to FacebookShare to Pinterest
Labels: animation

When the Tories (or the coalition if you want to be really pedantic) assumed power in the UK, I found myself instinctively yearning to despise them, but oddly enough struggled to find reasons to do so. Now however I'm almost relieved to confirm that they really have annoyed the hell out of me, by deciding to abolish the Sustainable Development Commission as part of their bonfire of the quangos/deficit reduction plan.

One of the highlights of the SDC's work was the visionary "Prosperity without Growth" report, which shocked a few poor deluded souls in government and beyond by recognising the systemic nature of the problems we face. By finally 'naming the problem' (and pointing towards a few pretty interesting alternative approaches too) I hoped the government could really push forward on the SD agenda. The SDC report is especially significant when you contrast it with other government policy documents on SD produced by DEFRA, which sought to frame the government's role in more passive terms as 'empowering' individuals to embrace behavioural change themselves. It's hard not to accept this has its place of course, but it's arguably nowhere near enough on its own to make a difference. My concern is that the SD agenda is becoming too influenced by a kind of neo-liberal individualism typefied by popular literature that suggests that all we need to do is 'nudge' people towards changing their behaviour. We needed the SDC to remind government of the need for systemic change - preventing irreversible climate change is going to need a slap not a nudge!
Posted by Colin Dey at 13:32 1 comment: 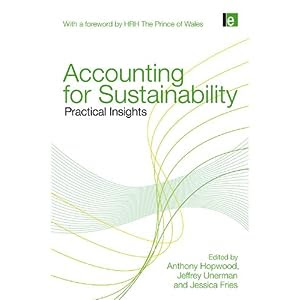 The recent work of the Prince of Wales' Accounting for Sustainability charity has now been published by Earthscan. The focus of the book is a number of case studies that examine the development of the  connected/integrated approach to sustainability accounting, upon which it seems the entire future of the discipline, and indeed all of humanity, now appears to rest...!

That seems to be the main selling point of the A4S book, but another important (and dare I suggest somewhat downplayed?) point is the fact that the cases have been researched and written by academics rather than, er, 'consultants'...  [OK, important disclosure - I was involved in one of the case studies featured in the book!]. Authors include Jeffrey Unerman, Brendan O'Dwyer, Ian Thomson and Linda Lewis, all of whom are distinguished academics in the field.

A session I was involved in at the recent GRI conference in Amsterdam featured some of the cases in the book. I'd encourage you to check out the Youtube footage of the session if only to see Ian Thomson's provocative presentation which certainly woke up the 'dark forces' of the corporates in attendance, who by that stage of the conference had seemed to be a bit too pleased with themselves about what a marvellous job they were all doing...
Posted by Colin Dey at 14:28 2 comments:

The Centre for Social & Environmental Accounting Research (CSEAR) will be hosting its annual congress next month, with other international conferences in Europe and elsewhere to follow. Highlights of this year's conference include a plenary from Brendan O'Dwyer and a fascinating workshop on the use of scenarios as a research method led by Ian Thomson and Rob Gray. CSEAR is easily the most important and essential event I attend every year, if you've never been I'd highly recommend it!

Academic conferences (at least the small friendly ones that CSEAR organise) are essential to what we might call intellectual renewal. But they aren't exactly carbon neutral. That said, I'd have happily blown my carbon footprint to go to the recent Asia-Pacific Interdisciplinary Conference on Accounting (APIRA) in Sydney. For those of us who didn't make it however, the conference featured an very interesting an innovative experiment in virtual presenting put together by Jan Bebbington, Ian Thomson and Bob Frame.

I was especially interested in Ian and Bob's experimental material which uses imagery in a very engaging and thought provoking way, a little reminiscent of Adam Curtis' films on power and politics.

This kind of imagery also works very well in powerpoint presentations - so I urge everyone to ditch ghastly bullet points and embrace the idea of 'Presentaion Zen'....
Posted by Colin Dey at 16:42 No comments: